It’s the most wonderful time of year!!!!

Do you think I am talking about the holidays? Naaawwww, that’d be so predictable. I’m talking about getting your freeze on for a reas-on at the Millinocket Marathon and a Half this Saturday, December 7, in the Magic City (aka Millinocket, Maine)! It is the most warm and fuzzy event in one of the coldest paces in New England – and it truly is magical. 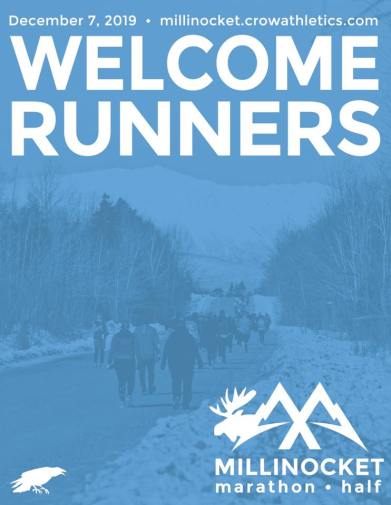 No matter the weather, approximately 2,500 runners are planning to participate in this fully subscribed event. In fact, the town is expecting as many visitors to descend for the weekend as there are residents! And the northern Maine hospitality machine is ready, with an artisan’s fair, spaghetti dinners, warming huts, pre- and post-race gatherings, and logging trucks to mark the start and finish.

As with the four prior years since the race’s inception, there is no entry fee. The idea is to entice visitors to this stunning area to spend money in a town that has weathered severe economic downturn since the paper mill, its primary industry, faltered, stumbled, and finally shuttered, over a decade ago. It takes place during a time of year that can otherwise be pretty quiet and challenging for businesses. It’s a shot of adrenaline for local businesses and residents when they need it most. In its fifth year, the event has become a tradition for runners and residents that everyone looks forward to.

And, this year, my husband is running the half and I will be there to enjoy being in one of my favorite places on Earth and to cheer on all the runners.

The marathon is, for my husband and I, this incredibly synergistic convergence of our passions. Often our passions look something like this, with his on the left and mine on the right: 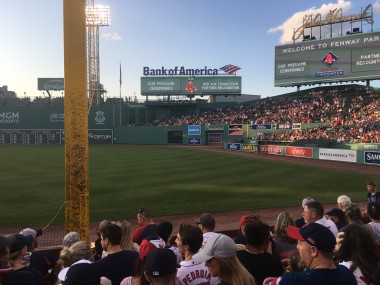 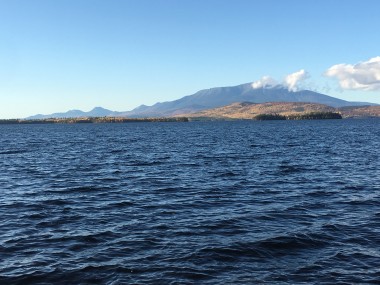 Fortunately, we appreciate each other’s interests and passions and accept that we don’t necessarily share the same ones all the time! Our relationship is fundamentally grounded in respect for the other person and their interests. We have enough overlap that it’s not an issue, though it’s taken some ironing out along the way to understand what drives each of us for sure. I didn’t realize, for example, what an offense it was to not actually pay attention to the game when we would go to Fenway Park. I like the atmosphere, but the game? Not so much. On the flip side, I used to be a park ranger in northern Maine, headquartered in Millinocket, and love the peace and solitude of the north Maine woods. He can’t quite understand the appeal of climbing a mountain (for fun?) and spends most of his outdoor time swatting away every biting bug from within a 100-mile radius that descends to attack him as soon as he steps out of the car.

So imagine my surprise when I told him about the Millinocket marathon and a half and he said, “Wow, that’s pretty cool. I’d like to do that some day.” I mean, for as much as I love it there, I personally thought it was a kind of crazy idea to drive over 5 hours to voluntarily run 13.1 or 26.2 miles in winter in that rugged country. I was pretty sure he’d have the same reaction. Instead, he watched and re-watched the Running with Cameras race video (which, incidentally, won an Emmy for the New England region in 2019!) and got ever more excited about it. He up’ed his fitness efforts and his running game. And he signed himself up as soon as registration opened for the 2019 race.

Here we are now, a couple of days away from the race. We are finding that both of us are excitedly anticipating the drive North and being a part of this event and this community, each in our own ways, but also together. He is anticipating the challenge of the run, the camaraderie of the event, and being part of something that helps a place he knows I love. I can’t wait to see Millinocket thriving and alive, to be close to those mountains, and to cheer on my husband, all the other runners, and this community that I have come to love over all my years of living and visiting there.

As the Millinocket Memorial Library t-shirt says, “Don’t Millinocket ’til you try it.” The Millinocket Marathon and a Half is fundamentally about connecting with other people and a new place (or an old place in a new way); about both opening our eyes to the challenges other people and their communities face, and also about opening our eyes to the natural beauty that surrounds us, even in winter; about taking action by showing up and participating fully as partners in making ripples of change; about taking a chance, and second chances; about caring so much for your spouse and what they love, that you are all in to support them (and vice versa); and, of course, about hope, both having it as well as catalyzing it. I can’t think of a better reason to put on every ounce of clothing I own to stand outside and freeze! Go runners!

4 thoughts on “The Magic City Beckons”