Rural communities are suffering. Highways bypass historic downtowns, big box stores cannibalize revenues from local retailers, and there are limited employment options, forcing young people to leave in search of opportunity. These issues are not unique to rural areas, but are exacerbated there by the lack of a critical population mass, and more piecemeal and sporadic services and resources. In some places, “homecomers” have led the way back to the rural communities where they were raised. Many communities are expanding high speed broadband and e-connectivity resources to improve education, health care, and business opportunities. And some communities band together to painstakingly plan for renewal by focusing on the vital role of their most historic structures in anchoring their past while launching a new future.

The Industrial Revolution spurred the creation out of farmland or forest of many of our nation’s cities and towns. Factories sprung up along the shores of powerful rivers to capitalize on the harnessed hydropower. Immigrants in search of work flocked to what, at the time, were outposts of civilization, eventually building homes and a community around their livelihoods. Homes, churches, performance halls, and other civic institutions emerged from the wildlands.

For a time, the paper industry of Millinocket, ME; the appliance and railroad industries of Fort Wayne, IN; the textiles of Lawrence, MA; the shoes of North Brookfield, MA; and the steel, textile, and tanneries of North Philadelphia, PA, to name just a few, thrived. But then manufacturing practices became more mechanized. Companies found cheaper labor in the southern U.S. or abroad. Demand for paper declined. More modern manufacturing facilities evolved and the original production methods and buildings became obsolete.

Slowly, insidiously, the industries that had built these cities, towns, and neighborhoods shuttered their doors, moving elsewhere or closing entirely. What remains are vacant mill buildings, deteriorating opera houses, empty storefronts – the dilapidated, decaying nucleus of the country’s manufacturing communities. What happens when the primary source of employment evaporates but a community has set down roots and traditions; has built ornate civic structures, but doesn’t have the resources to maintain them? When the city or town itself loses its spark and stagnates? And when it barely recovers from the last recession before the next one begins?

According to the Economic Innovation Group’s 2018 Distressed Communities Report, recovery from the most recent recession has been unevenly distributed. Since the 1990s, there has been an “intensifying ruralization of distress,” said John Lettieri, EIG’s president. The challenges facing rural America are complex and stubborn and difficult to solve. At the same time, our current “period of national prosperity is our chance to reinvest in communities and rekindle the economy’s dynamic forces.” (EIG report)

A new future requires some sort of catalyst to forge forward out of stagnation. What is it that finally ignites revitalization in some communities, while others continue to languish? I have a few theories after two decades working in real estate analysis and community development. One is an engaged and competent local government. Another is a devoted group of local citizens with a strong leader. A cohesive vision and implementable plan, both with short- and long-term goals, is critical. Usually success takes years of coordinated effort between local and state government and committed volunteers. Surely sprinkled in there is a bit of luck and good timing.

In North Brookfield, MA, a rural community of 4,800 people about 25 minutes from Worcester and 60 miles west of Boston, residents and town leaders have rallied around the historic Townhouse as the focal point for their community’s redevelopment efforts. Designed by Eldridge Boyden, a locally accomplished architect, the Townhouse was one of the first public spaces in this country built in the French Second Empire and Italianate styles. The building was constructed in 1864, and served as a hub of political, cultural, and community activity for the broader region.

Then times changed. The Batcheller Shoe Company closed in the early 1900s, and with that and the evolution of retail towards big box stores and online shopping most of the family-owned businesses in downtown North Brookfield also eventually closed. Currently, the almost 14,500 square foot Townhouse is vacant, and the main street is quiet. The Bell Tower was damaged in Tropical Storm Irene in 2011 and determined to be structurally unsound.

But North Brookfield is a small, tight-knit community with a ton of heart. Manufacturing continues on a smaller scale, with Vibram, the Italian shoe sole company, operating the former Quabog Corporation rubber manufacturing plant across the street from the Townhouse. The Friends of the North Brookfield Townhouse, a non-profit group brimming with volunteers, ideas, and passion, was organized over a decade ago with the mission of preserving and renovating the Townhouse to re-establish it as the center of civic, political, social, and cultural activities. The Friends and the town have worked arduously to preserve the building, hiring a local craftsman to replace the Bell Tower in 2014 and, in 2015, thanks to state funding, securing the building from water infiltration by replacing the roof, windows, dormers and gutters. 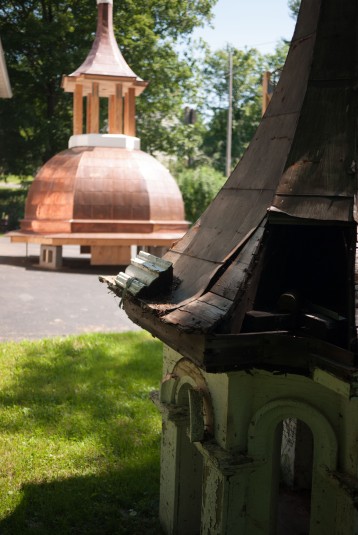 Among many other initiatives, including applying for and being awarded an allocation of historic tax credits to help finance a renovation, in the fall of 2018 the Friends facilitated the painting of the building’s exterior. They collected donations for all of the supplies, and brought in lunch daily for the workers, a number of whom were prisoners from the Worcester County Sheriff’s office work release program. Townspeople passing by would see what was happening and stop to ask how they could help. Some literally picked up a paintbrush and worked for a couple of days, some gave money for supplies, while others brought chocolate chip cookies, brownies or homemade pumpkin bread to share. There was no cost to the town. The results speak for themselves. 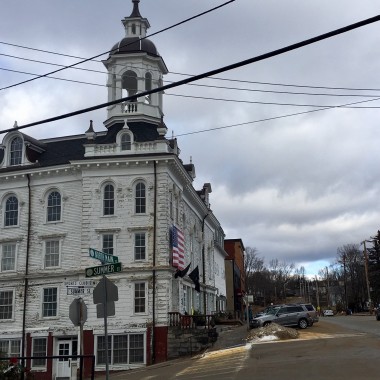 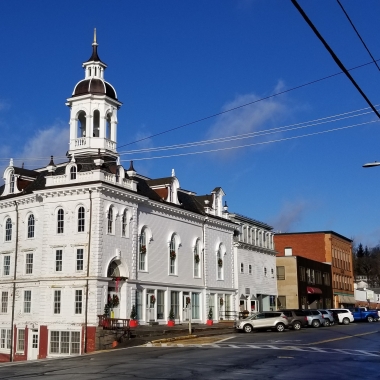 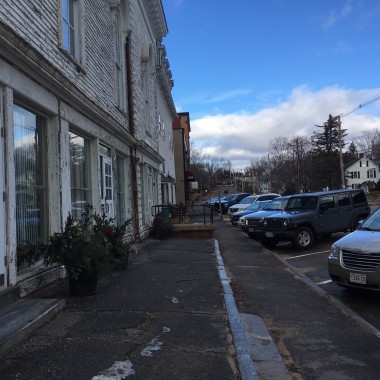 The Townhouse is a building with high emotional content. It has the capacity to stir one’s soul. In the traditional metrics of market conditions, it’s a challenge and the Friends will need financial support from grants to private donations to pull it off. But not everything that is worthwhile in life is quantifiable. In fact, I would argue, that the things that matter most have no intrinsic monetary value – like community, integrity, hard work, passion, and hope. The town of North Brookfield has these in spades. The Townhouse is a center piece of the town architecturally and a vital link between its past and its future. That future is being constructed with vision and dedication, strong leadership, and a plan based in solid fundamentals that will capture the imagination of the town and the region. Maybe sprinkled with a bit of luck for good measure.

Welcome to North Brookfield – the heart and sole of Massachusetts!

“Though nothing can bring back the hour
Of splendor in the grass, of glory in the flower;
We will grieve not, rather find
Strength in what remains behind;
In the primal sympathy
Which having been must ever be…”
― from William Wordsworth’s Ode: Intimations of Immortality

“Let me tell you the secret that has led to my goal. My strength lies solely in my tenacity.” – Louis Pasteur

Leave a Reply to the #1 Itinerary Cancel reply